‘I have been privileged in the places Music has brought me’  says Orla Fallon.

Given the places she’s been these past years it would be difficult to disagree. US Presidents Clinton and Bush and Irish President Mary McAleese have all been part of Orla’s audience both as a solo artist and as a member of the phenomenally successful group Celtic Woman.‘Playing in such places as The Vatican or The White House, you never realise when you are growing up that you will ever see inside these places let alone sing and play. I think that’s the wonder of the whole thing. It’s amazing the doors that Music can open for you.’

A harpist and singer from Knockananna in Co Wicklow, Orla is an original member of the group Celtic Woman. The group’s TV Specials have aired on PBS Television in The US over 14,000 times and Orla has toured extensively in North America playing such prestigious venues as Carnegie Hall and Radio City Music Hall, New York, Redrocks, Colorado, The Greek Theatre, LA and The Boston Opera House.

Since leaving Celtic Woman in December 2008, Orla has been carving out a successful solo path. In February 2009 she won four Irish Music Association Awards including, Best Solo Singer and Best Harpist. Her version of ‘The Water Is Wide’ featured on The Popular US soap ‘The Bold and the Beautiful’ and on The Emmy Awards that same year.

In December of 2010, Orla’s first solo public television special, ‘Orla Fallon’s Celtic Christmas’ put her back at the centre of The PBS Television universe in The US. More than 100 stations aired the show and special guests included the original Riverdance Choir ‘Anuna’.

‘Orla Fallon’s Celtic Christmas’, shot at The Polk Theatre in Nashville, Tennessee in August 2010 included a DVD of the Show. A special companion CD included an appearance by 20 times Grammy Award Winner and Hall of Famer Vince Gill as a special guest on the CD for a duet of ‘The Little Drummer Boy’. The CD went to number 4 of The World Music Charts. That same year Orla’s other Christmas CD, ‘Winter, Fire and Snow’ reached number 10 on The Billboard World Music Charts in The US.

In 2011 Orla was back with yet another Public Television Special entitled ‘My Land’, which starred Orla in an Irish Musical, geographical and cultural celebration featuring the legendary Dubliners, Tommy Fleming, Damien Dempsey and The Dublin Gospel Choir as special guests. The show was shot on location throughout Ireland, along with a full length concert filmed at the majestic Royal Hospital, Kilmainham, one of the finest 17thcentury buildings in Ireland. The companion CD to the ‘My Land’ DVD reached number 4 on The World Music Charts and also won an Irish Music Association Award for Best New CD in February 2012.

Orla, who credits her late Grandmother with instilling an abiding love of Irish Music and culture, is now carving out a very successful solo career for herself. In 2011 she negotiated a successful 50 date coast to coast tour of The US, as well as several concerts in Ireland. She was named on The Billboard Best of 2011 Charts, reaching number 4 on The World Music Charts and her album Orla Fallon’s Celtic Christmas was number 14 on The Best Selling World Music Albums that year.

2012 was a momentous year for Orla personally when she gave birth to her first child, Freddie. It was while she was expecting Freddie that she recorded her latest CD ‘Lullaby Time’; a compilation of lullabies, in Kansas City in The US. Produced by Dan Shea who has worked with illustrious artists such as Celine Dion, Mariah Carey Jennifer Lopez and The Pussy Cat Dolls, the album features popular tracks such as ‘When you Wish Upon A Star’, ‘Brahms Lullaby’, Coldplay’s ‘Yellow’ as well as original material.

In December 2012 Orla completed her first solo tour of The Netherlands with her band.

2013 saw the release of ‘Lullaby Time’ in Ireland. It entered The Irma Indie Charts at number 9 and has received critical acclaim.

Following a break from Music to concentrate on being a Mum to her son Freddie, Orla released her most honest and heartfelt album to date in April 2017. Stepping away from her harp , “Sweet By and By ” has a very country feel and features such American classics as Peter, Paul and Mary’s “Five Hundred Miles “, Johnny Cash’s ” I still Miss Someone” and the achingly beautiful “In The Sweet By and By “.

Having spent a lot of time in Nashville during her US tours, Orla always longed to do a country album. In a collection of songs that have great personal meaning for Orla. She evokes feelings of love and heartbreak with the great loss of her Father.

“Sweet By and By” is a timeless piece of work that should stand the test of time for many years to come. 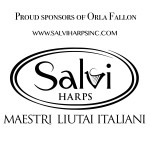 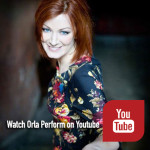